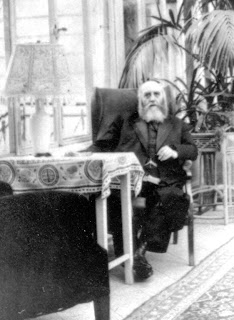 The following is an abridged excerpt from the diary of the Freidike Rebbe, printed in Likkutai Dibburim Vol, 4 as translated by Rabbi Touger (available here). Text enclosed in square prentices has been added either by the Translator or myself. I have also changed the order in which some of the stories are recorded.
Sunday, 20 Iyar, 5656 [1896, the author was 15 years old at the time]
2.00 p.m.
After great efforts I managed to get permission to join in the Shabbos meal at the home of my respected grandmother, the Rebbitzin [Rivkah, mother of the Rebbe Rashab and Husband of the Rebbe Maharash]. The meals there are always interesting, because at the table they recount episodes full of content -- especially this Shabbos, when two guests of stature arrived in town, repositories of chassidic oral tradition: R. Avraham Abba Persohn [G-d willing a description of this Chossid will appear in the next post, which will include some of the stories he recounted on this occasion] and R. Shmuel HaLevi Horovitz. [Also known as R. Shmuel Mozinker, because for many years he lived in an inn of that name in a forest near Babinovitch. He studied in the yeshivah of the Tzemach Tzedek in the years 5613-5618 [1853-1858]. He was a meticulously correct baal shmuah (master of Chassidic tales). My father [the Rebbe Rashab] once said that he reported oral traditions with utter reliability, even with respect to their wording. Any point about which he had a doubt, he omitted from his memoirs. (Based on a letter of the Rebbe Rayatz.)]
On Friday evening, though it was almost eleven when we began the Shabbos meal, there was no haste, and it continued until 1:30 a.m. In honor of the distinguished guest, R. Abba Persohn, my former teacher R. Nissan Skoblo, who loved hearing chassidic traditions firsthand, joined the company at the table.
* * *
The History of Reb Abba David Iskasya
R. Shmuel Horovitz recalled that among the elder chassidim of Denenburg and Griva there was a elderly scholar known as R. Abba'le David Iskasya. In the study of nigleh he was the longtime colleague of the learned R. Baruch Mordechai [son in law of the last Rov of Vilna, Reb Shmuel a fuller account of Reb Boruch Mordechai’s history will be provided in a future post] when the latter was still in Vilna, and in Chassidus he was his disciple.
“R. Abba David, who was born in Polotzk, was gifted and assiduous, and advanced from one yeshivah to the next until he found his way to the yeshivah of the Gaon of Vilna, where he shone as an outstanding student. By nature he leaned towards solitude and intensive study. For some days he lived in the shul in a suburb called Shnipishak, and then moved into the center of town. Throughout all that time not one idle word escaped his lips; he knew of nothing but conscientious study; and he made the acquaintance of no man.
"However, when it became known that the son-in-law of the head of the Rabbinical Court of [Vilna], 'the Jerusalem of Lithuania,' the brilliant R. Baruch Mordechai, was now loyal to the banner of 'the Sect' and was now at the head of the [local chassidic] movement, there erupted such a scandal that it aroused even the curiosity of R. Abba David: What lay at the root of this storm that was rocking all of Jewry and Vilna, and especially agitated its most eminent scholars? To cut a long story short, the more he savored the scholarly expositions of Chassidus on themes such as knowing G-d by understanding the concept of creation ex nihilo, the more did his soul cleave to its teachings. Since he was a scholar of great standing, whom the Alter Rebbe chose to teach his grandson the Tzemach Tzedek for a full year after his bar mitzvah, he was offered numerous rabbinical posts. He refused them all because of his love of solitude, preferring to live in a village for about thirty years. And that was why the chassidim used to call him 'Abba David Iskasya [an allusion to a Kabbalistic concept of Divine Self-Concealment].'
"When he was about eighty years old he came to live near his son, R. Zerach, the moreh tzedek of Griva, who rented him an apartment near the shul. He spent most of his days and nights studying in the shul, and sometimes slept there.
"The chassidic communities of Denenburg and Griva treated him with reverence, since he was known to be a scholar of repute in both the revealed and esoteric planes of the Torah. Indeed, elderly chassidim testified that forty years earlier, in 5567 (1807), the Mitteler Rebbe had said: 'Abba David's brain is saturated with Divine intellect.'
"A chassid by the name of R. Zalman Moshe Leitzener, who for many years had known R. Abba'le David from the time he had been in Vitebsk and in a village near Nevel, and who had also met him on many occasions in Lubavitch, was amazed that he had changed his conduct -- far from being a silent recluse, he was now companionable and a ready talker."
*
Lag B’Omer 5604
Among the events recalled by R. Abba'le David Iskasya [as transmitted at my grandmother's Shabbos table by R. Shmuel HaLevi Horovitz] was the celebration of Lag BaOmer in Lubavitch in 5604 (1844). This is how he described it: