The Rov of the Chassidic Shtetel of Dokshitz, Reb Leib Sheinin learnt in Yeshivas Toimchei Temimim Lubavitch between the years 5668-5677 (1908-1917). Arriving there at a young age, from his home town of Babroisk, he grew to become one of the most outstanding student’s of the Yeshivah and was famous for the many hours he sent daily in prayer. In the words of Reb Yehudah Chitrik (Reshimos Devorim, in the New Edition P. 302) “the Temimim would often repeat in the name of the Rebbe Rashab that all his [the Rebbe’s] work, his efforts and self-sacrifice, [expended] in order to found Yeshivas Toimchei Temimim – is worth it in order to produce such a Talmid as Reb Leib Sheinin”. In the version recorded in Lubavitch Ve’chai’oleho, he added “all the rest are extra gain”. He was famed as an ‘Oivied’ [one who serves G-d, through lengthy prayer and contemplation] and it was said of him that he reached the level of Beinoni as described in Tanya (Ibid).

The Rebbe - The Berlin-Paris Years

There has recently been a renewed interest in the Lubavitcher Rebbe’s activities and lifestyle during the period that he spent in Berlin and Paris between the years 1927-1940.
Apparently there has been some speculation "that [the future Rebbe] Menachem Schneerson… was never completely engaged by his chasidic upbringing, preferring instead the modernizing and secularizing influences that made such significant inroads among young Jewish intellectuals in early 20th-century Russia and Europe." As evidence they point to the fact that he chose “to trim his beard, wear modern suits, and distance himself from the chasidic community in Paris, where he and his wife, the daughter of the previous Lubavitcher Rebbe, lived after their marriage.”
I will not dispute the assertion that, though

Amongst Chassidim, Shavuos – “the time of the giving of our Torah” and the Yortzeit of the Baal Shem Tov, was a very special time. This unique occasion was marked primarily by the special Maamorim – Chassidic discourses, referred to as Divrei Elokim Chaim [“the word of the living G-d”], which were said by the Rabbeim. Much of the forty eight hours of Yom Tov was spent hearing the Maamorim, studying them and reviewing them. The entire atmosphere was permeated by anticipation, excitement and a palpable enthusiasm that centered on the study and repetition of the Maamorim. (All of the accounts detailed below are quoted and cited in Oitzer Minhogai Chabad, Vol. 2.)
The Alter Rebbe usually said two Maamorim (presumably one on each night) each year. However, there were occasions when he said three or four, and we actually have five Maamorim which were all said in the year 5564 (1804).
The Mitteler Rebbe, who was known for his lengthy and very explanatory Discourses, would often say several Maamorim even on a regular Shabbos. One Shavous he said a total of eleven Maamorim, each of them very lengthy. His uncle Reh Yehudah Leib (the Alter Rebbe’s brother, known as the Maharil) gently chided him, saying, “Nit aleh hobin dein kop!” [“Not everyone has a head like yours!”] (Beis Rebbi, Vol. 2 pp 3a.)
One year after Shacharis the Mitteler Rebbe began to say a Maamer, explaining the concepts at great length as was his custom. When he finished the Maamer, the Chassidim began to disperse but quickly relised that the Rebbe was about to begin a second Maamer. Again, the Rebbe spoke at great length and when he finished it was apparent that he was preparing himself to begin a third. Seeing this, Reb Hillel Paritcher ran to the house of the Tzemach Tzedek [who did not always attend, his father-in-law – the Mitteler Rebbe’s, Maamorim], unable to restrain himself he grabbed the Tzemach Tzedek by the beard and cried, “Mendel Mendel! Kum her on zeh vi es gist zich chassidus in gass!” [“Mendel Mendel! Come, hear and see how Chassidus is pouring out in the street!”] (Migdal Oiz, pp 187)
The Tzemach Tzedek
In the year 5607 (1847) many Chassidim came to spend Shavuos [with the Tzemach Tzedek] amongst them the most famous, Reb Hillel Paritcher and Reb Betzalel Mai’azaritz, as well as many others. After coming from the Mikveh on Eruv Shavuos, the Rebbe said a Maamer beginning “Anoichi Havyeh Eloikechoh” [“I am Heshem your G-d” the first of the Ten Commandments]. The son’s of the Rebbe spent the entire evening and night, each in his own house, reviewing the Maamer [before the guests] and before dawn Reb Bezalel repeated the entire Maamer from memory.
After Davening there was a festive meal and all the great Chassidim and Rabbonim, as well as the sons of the Rebbe, were invited… those who were not invited stood…. When all the invitees were seated the Rebbe came out of his room and sat at the table… he poured some wine into his cup, made a brocho and said L’Chaim to his sons and the other invitees, nodding his holy head to all those who stood. He began to sing and his sons – not the invitees – sang with him. It was extremely gratifying to hear their melody. Then the Rebbe rose from his chair and began to dance alone where he stood, he held a handkerchief in his hand [it was the custom of the Rabbeim to wrap their hand in a handkerchief while sayin a Maamer]. The sons of the Rebbe – but not the invitees – clapped their hands in accompaniment… 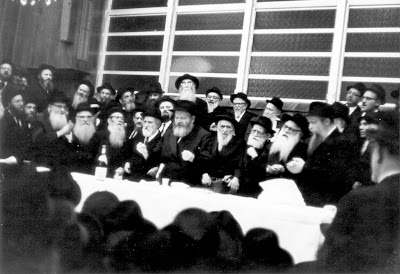 
The following is a continuation of an abridged excerpt from the diary of the Freidike Rebbe dated Sunday, 2o Iyar, 5656. For part 1 see here. Text enclosed in square parentheses has been added either by the Translator or myself. I have also changed the order in which some of the stories are recorded.


After [the morning] davenen, when most of the worshipers had gone home and only a few remained, three elder chassidim sat together in the room adjoining the zal and exchanged narratives -- my teacher R. Shmuel Betzalel, R. Abba Persohn, and R. Shmuel Gurevitch.
[Reb Avrohom Abba Persohn’s father was a Chossid of the Mitteler Rebbe and later the Tzemach Tzedek, as well as being a respected Chossid, he was also one of the most respected philanthropists in the region. He had his son, Avrohom Abba, educated by Chassidim of the old-school.

His was a very emotional personality, but at the same time well balanced, he was moderate in his speech and his conduct. From his youth he would interest himself in the stories of the Chassidic elders and he collected them one by one like a collector of pearls, reviewing them with great precision. When he would relate these stories, he would add lengthy introductions, describing the era, the place and the character of the various personalities. (From the periodical “Hatomim”, Vol. 6, pp 92-93.)] 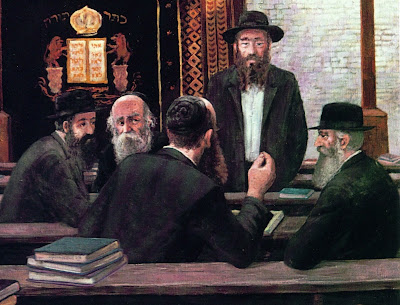 From a talk of the Lubavitcher Rebbe Zatza”l delivered on Shabbos Parshas Mishpotim 5714:

Translators note: the following story describes events that took place in spiritual realms, belonging to a dimension beyond human conception or description. Not having the words to describe such sublimity we must resort to a description, which does not do justice and is to a great extent incongruent, with the true nature of the spiritual realms described.

Due to a certain matter which the Rebbe Rashab achieved, his father, the Rebbe Maharash, took him into the supernal realms, till a particular place to which the Rebbe Rashab was able to accompany the rebbe Maharash. From there the Rebbe Maharash continued on by himself. In the meantime, the Rebbe Rashab noticed a chamber where a particularly brilliant Divine revelation was manifest. There sat a Jew who relative to his level of Divine service, apparently did not belong in such a lofty realm.
When the Rebbe Maharash returned, the Rebbe Rashab asked him, “How did come about that this Jew reached such an exalted realm?” The Rebbe Maharash answered, “Though he is, indeed, a simple Jew, he was nevertheless fluent in Tanya and was accustomed to repeating Tanya by-heart.”
The lesson from this story [explained the Rebbe Zatza”l] is that even an individual who is lacking in understanding and intellectual assimilation, nevertheless merits a great revelation. However, in order not to sit in that lofty realm with “closed eyes” seeing without comprehending, hearing and not understanding that which one hears – one must study and understand with comprehension and intellectual assimilation. Then one will be in a situation of open eyes and ears [having a proper appreciation for the exalted and wondrous revelation].
The way to understanding and comprehension is first and foremost through effort, simply to toil in one’s study of Chassidus for “one who claims that he did not toil, but nevertheless succeeded, is not to be believed.” (see Megilah 6b)
Added to this is the recommendation that one give charity, physical charity and who much more so spiritual charity, through which “ones heart and mind become purified a thousand fold.” (see Torah Ohr, 1a)

May these words provide some measure of comfort as we mourn the untimely loss of HaTomim Nosson Notte ben Reb Zalman Yuda A”H Dietsch. 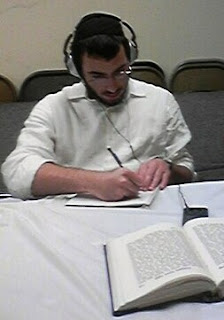 A picture of Nosson listening to the in depth Shuirim of Reb Yoel Kahn on Tanya, in the summer of 5769 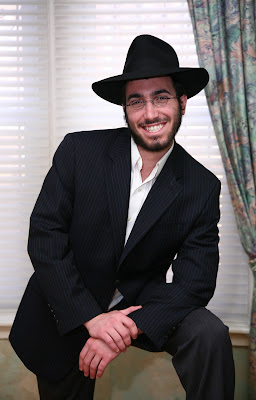 הת' נתן נטע בן ר' זלמן יודא ע"ה דייטש
http://rememberingnosson.blogspot.com/
A bochur who I knew personally. He knew the fifty-three perokim of Tanya and Igeres HaTeshuvah by heart, word-by-word. He had a heart of Gold and was always smiling. In his presence everyone was comfortable, everyone was smiling. The void he leaves behind him will never be filled.