The Rebbe - The Berlin-Paris Years

There has recently been a renewed interest in the Lubavitcher Rebbe’s activities and lifestyle during the period that he spent in Berlin and Paris between the years 1927-1940.
Apparently there has been some speculation "that [the future Rebbe] Menachem Schneerson… was never completely engaged by his chasidic upbringing, preferring instead the modernizing and secularizing influences that made such significant inroads among young Jewish intellectuals in early 20th-century Russia and Europe." As evidence they point to the fact that he chose “to trim his beard, wear modern suits, and distance himself from the chasidic community in Paris, where he and his wife, the daughter of the previous Lubavitcher Rebbe, lived after their marriage.”
I will not dispute the assertion that, though

*
The first and the most accessible proof that the Rebbe remained a fully committed Chossid, despite his external appearance, are the many video interviews conducted with people who relate first-hand testimony of people who knew him personally during this period. Below is the content of some of these interviews which you can watch yourselves. [Although the interviews were conducted by Chabad, the interviewees themselves are generally not Chabad, and there is no reason to suspect them of bias.]
See here
See here
Another interesting episode he related: when the Belzer Rebbe, the Kedushas Ahron visited Berlin for medical reasons, Ferstenburg accompanied the Rebbe to visit the Belzer Rebbe. The Belzer Rebbe stood with closed eyes with his hand wrapped in a towel and shook people’s hands through the towel. However when the Rebbe came, he picked up his eyes and took of the towel, giving him his bare hand.
[Regarding the issue of the Rebbe’s beard, this has already been discussed here
See here
Some of the many other video testimonials regarding this period have been collected here
*
Additionally, and perhaps more importantly, the Rebbe’s personal journals from this period have been published, filling five volumes mainly with Chudishim ranging across Kabbalah, Gemorah, Chassidus and Halacha, in a brilliant display of broad knowledge and incisive depth(they are available on hebrewbooks.org, the first volume is here). Reshimos HaMenorah written in 5699 (1939), fills a separate volume and deals with “the [variant] opinions regarding the order of the lighting of the Menorah in the Temple and their reasoning’s, and the significance according to Drush founded on the explanations in Chassidus”. This large body of published information combined with the Rebbe’s published letters, and those which his father wrote to him provide ample evidence of the tremendous degree to which he was steeped in Torah learning and Chassidic thought even as he attended the lectures of the secular professors in the universities of Europe. Ignorance of this gold mine, which opens a broad window of invaluable insight into exactly what was preoccupying the Rebbe’s mind during the period under discussion, equals an automatic disqualification from passing comment on the Rebbe's inner life.
Even a cursory glance at some of this material shows that apart from being “completely engaged by his chasidic upbringing”, the concept of Moshiach was already high up in the Rebbe’s area of interest. This refutes the suggestion that Moshiach was an idea that gradually developed after the Rebbe decided to pursue “a new career goal”, indeed on his 54th birthday in 1956 the Rebbe himself wrote in a letter that “From the time that I was a child attending cheder, and even before, there began to take form in my mind a picture of the future redemption -- the redemption of Israel from its last exile, a redemption such as would explicate the suffering, the decrees and the massacres of the galut...” The fundamentals which he absorbed as young child, which he was educated in by his father and the Chassidic Melamdim who taught him, remained with him throughout his life and were in no way eroded during the time he spent in the “modern” atmosphere of Berlin and Paris.
Let us not overlook too the active connection, which the Rebbe kept up with his father-in-law during this period. Even when he was physically separated from his father-in-law they remained in constant communication, and the Rebbe continued to work on various projects on his father-in-laws behalf. Notably, the Rebbe acted as an editor for the periodical “Hatomim”, sorting through the many letters penned by his father-in-law, copies of which were forwarded to Berlin and later Paris, and selecting for publication those that were relevant to Chassidim in general as well there original recipients. The Rebbe’s work in this area is detailed in the introduction to the Igros Kodesh of the Friediker Rebbe Vol. 3. Another example of a more specific project which the Friediker Rebbe charged his son-in-law with, is the writing of Reshimas HaMenorah as described above.
As evidenced from the Reshimos and other sources the Friediker Rebbe was present in Berlin together with his son-in-law at the beginning of Av 5690 (1930) [where he stopped on his back to Riga after his trip to America]. The Rebbe traveled to Riga to spend the entire Tishrei 5691 [1930] with his father-in-law, and again before the festival of Pesach of the same year [1931] staying till after Shavuos. He was again together with his father-in-law for Tishrei 5692, which was spent in Otvotzk, a suburb of Warsaw, where the main branch of Yeshivas Toimchei Temimim had been established, returning to Riga together with him where he stayed till the end of Cheshvan before traveling back to Berlin. He returned to Riga for Pesach and remained together with his father-in-law through the Marriage of his sister-in-law Shaineh, after Shavuos, after which he accompanied him to Poland, where they remained for much of the Summer before returning to Riga for Tishrei 5693 [1932] where he remained till after Chanukah...
I won’t bore you with too many details, but suffice it to say that the Rebbe spent large parts of the year away from Berlin and Paris, in order to be in the company of his father-in-law, and was visited in turn by the Friediker Rebbe in those cities. As is clear from his personal journals, the Rebbe relished these opportunities and meticulously recorded everything he heard and saw, his deep interest in Chassidic customs and stories is self evident. These are not the journals of a “westernized / modernized thinker” but the journals of a Chossid deeply attached to his Chassidic roots and his Rebbe, and constantly preoccupied with the infinite truth of G-d’s Torah. 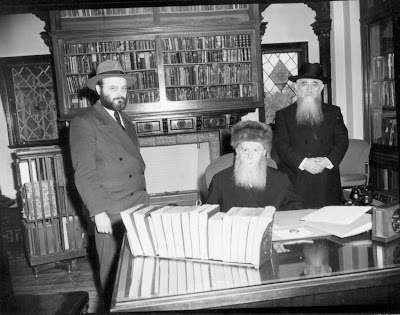 Did the Rebbe want to become an engineer? Perhaps. Did he view that as his goal in life? Ciratinly not. Did he veer away from the Chassidic path only to return after accepting “the undeniable facts that he was a forty-something immigrant with little English and less chance of making significant inroads as a successful secular professional.” Whereupon “he reluctantly accepted that a career as a chasidic Rebbe would have to do”? Certainly not. It is clear from the information available that the Rebbe was completely committed to the Chassidic ideal, revered his father-in-law and followed his every directive unquestioningly. A mere glance at the relevant sources reveals that at every step of the way, the Rebbe was a servant who did what had to be done conscientiously and quietly, serving G-d with complete selflessness, while trying to keep as low a profile as possible. Reluctant though he was, when his father-in-law passed away, he did not shirk the responsibility thrust on him, and accepting the demands of the Chassidim led them with unparalleled self-sacrifice to confront the new challenges faced by post-holocaust American Jewry.