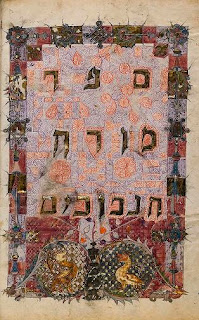 The Bodleian Library’s winter exhibition tells the story of how together Jews, Christians and Muslims have contributed to the development of the book. Crossing Borders: Hebrew Manuscripts as a Meeting-place of Cultures draws on the Bodleian’s Hebrew holdings, one of the largest and most important collections of Hebrew manuscripts in the world.
Covering a time span of 300 years between the thirteenth century and fifteenth century, the exhibition brings to light different aspects of Jewish life in a non-Jewish medieval society.
The social and cultural interaction between Jews and non-Jews in both the Muslim and Christian world is mirrored in the blending of the inherent elements of the manuscript such as decorative patterns, writing styles, script types and text genres. As a result Hebrew manuscripts produced in different geo-cultural regions look quite different, showing greater similarities to the non-Hebrew books produced in the same region than to each other.
By importing elements of the host culture, the Hebrew manuscripts are proof of coexistence and cultural affinity, as well as practical cooperation between Jews and their non-Jewish neighbours in the Middle Ages.  The assortment of manuscripts is not restricted to religious text, but expend to literary and scientific works as well.
Highlights of the exhibition include:
Piet van Boxel, Hebraica and Judaica Curator, Bodleian Library said: ‘As the exhibition title suggests, Crossing Borders recounts the history of medieval culture at the intersection between Jewish, Christian and Muslim communities. It is a largely unfamiliar story which needs to be told and can help us to understand better the relationship between these communities even in our contemporary times.’
The Bodleian’s Hebraica collection dates from the earliest years of the Library’s history and the accession of several key collections in the 19th century, such as the Oppenheimer Library and fragments from the Cairo Genizah, has rendered it one of the most important collections of Hebrew manuscripts in the world, alongside an extraordinarily rich collection of early Hebrew and Yiddish printed books. All fields of traditional Hebrew scholarship are represented in the collection. The Library continues to select and acquire the latest books in the various fields that support the University’s programmes in Hebrew and Jewish Studies, and Eastern Christianity.
A book which accompanies the exhibition is also available for purchase. Crossing Borders: Hebrew Manuscripts as a Meeting-place of Cultures, edited by Piet van Boxel and Sabine Arndt, paperback, 128 pp, 70 colour images, £24.99, ISBN:  978 1 85124 313 6