The Rov of the Chassidic Shtetel of Dokshitz, Reb Leib Sheinin learnt in Yeshivas Toimchei Temimim Lubavitch between the years 5668-5677 (1908-1917). Arriving there at a young age, from his home town of Babroisk, he grew to become one of the most outstanding student’s of the Yeshivah and was famous for the many hours he sent daily in prayer. In the words of Reb Yehudah Chitrik (Reshimos Devorim, in the New Edition P. 302) “the Temimim would often repeat in the name of the Rebbe Rashab that all his [the Rebbe’s] work, his efforts and self-sacrifice, [expended] in order to found Yeshivas Toimchei Temimim – is worth it in order to produce such a Talmid as Reb Leib Sheinin”. In the version recorded in Lubavitch Ve’chai’oleho, he added “all the rest are extra gain”. He was famed as an ‘Oivied’ [one who serves G-d, through lengthy prayer and contemplation] and it was said of him that he reached the level of Beinoni as described in Tanya (Ibid).


His classmate from an early age, Reb Avrohom Pariz – who also lived in Babroisk, related, “When I was a youngster I sat and learned in Yeshivas Toimchei Temimim in the town of Lubavitch. For the festivals I returned to my home in the town of Babroisk. One day I was walking in the street, and I was approached by a Jew who requested that I enter the Shul in order to complete a Minyan for Mincha. When I entered the Shul I found my friend the HaTomim Aryeh-Leib Sheinin sitting, crowned in Teffilin and Davening at great length. I realized that including Aryeh-Leib, there was already a complete Minyan without me. So I asked those present, ‘why don’t you also count my friend Aryeh Leib?’ They answered that this Yeshiva student had been sitting in the same place since the morning, and is completely oblivious to everything going on around him, therefore they thought that he was ‘out of his mind’ and unfit to be counted as part of the Minyan. It was then that I realized the great difference between myself and Aryeh-Leib. In the eyes of the laymen, I was considered ‘normal’…”

There are many descriptions of Reb Leib’s Davening and his complete immersion in the study and contemplation of Chassidus, which remained the defining features of his personality throughout his life. He lived his life not in the physical and limited world, but in the infinite world of Chassidus and Divine service. (See Chassidim Horishoinim Vol 2. Pages 243 -255 for a collection of sources describing Reb Leib.)

In 5682 (1922) Reb Leib was sent by the Friedike Rebbe to serve as the Rabbi of the town of Dokshitz. From the beginning he was met with great opposition, and would have left if not for the fact that the Rebbe had told him to remain at his post, promising him that all who opposed him would eventually become his friends. This promise fulfilled to the extent that Reb Leib was known and respect throughout the entire district. (See Di Yiddishe Heim, Vol. 1 page 212.) I came across an interesting piece in which the editor of this journal 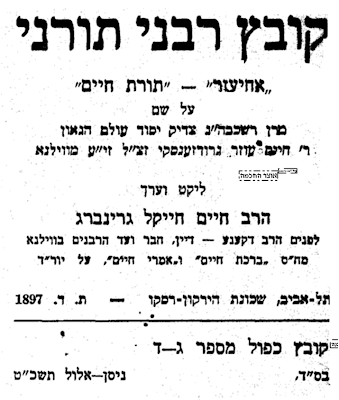 tells us of Reb Chaim Oizer’s comments on being introduced to Reb Leib by himself. 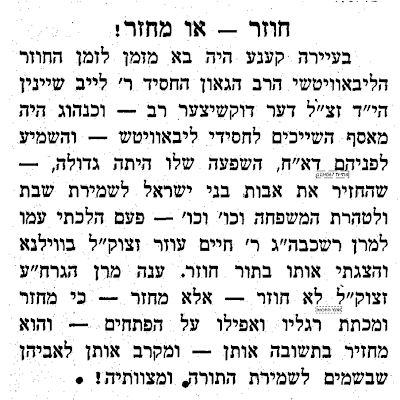 [By the way if anyone has any information about the editor, Reb Chaim Chaikel Greenburg, please comment.]

While on the subject; another occasion when Reb Leib would have met Reb Chaim Oizer, was at the wedding of the Friedike Rebbe’s daughter Sheine to Reb Mendel Horenshtien, Sivan 5692 (1932). (See Reshimas Hayoman, page 241.)

A Jew from Dokshitz who witnessed the destruction of his community at the hands of the Nazis, but escaped to tell the tale, described the last minutes of Reb Leib’s life. “They gathered all the congregation into the main Shul. There they encountered Reb Leib and seeing his saintly countenance, wrapped in Talis and Teffilin were awed by him. They told him that they would spare his life, Reb Leib however refused, saying that he would go to his death together with his congregation. The Nazis gave him permission to speak to his people before they were killed and [as I remember Reb Yisroel Gorden telling the story, he explained to them the importance and great merit involved in fulfilling the Mitzveh of Misiras Nefesh Al Kidush Hashem, making a Brochoh “Asher Kidishonu... Vzivonu Al Kidush Hashem” to which everyone answered “Amen”, then] he began to sing a Chabad Nigun Hakofus for Simchas Torah… (See Shmues Vesipurim Vol 3. 242.)

When the news reached America there were those who commented that he was Arop Fun Zinen [out of his mind] literally “below” sanity, the response of the Chassidim who had known him well in Dokshitz responded, “no, he was Aruf Fun Zinen” – “above” sanity. Reb Leib was someone who had achieved a higher understanding of reality, that went far beyond the dictates of cold logic. (As heard from Reb Yisroel Gordon, whose father was the Shoichet in Dokshitz before he came to America, and a close friend and confident of Reb Leib. See also Chassidim Horishoinim.)