In Elul 5645 (1885) The Friediker Rebbe, Rabbi Yosef Yitzchak Schneersohn, then a youn boy just five years old traveled to Yalta with his parents. More than forty years later, while under soviet arrest in the Shpalernaya Prison in Leningrad, he fortified himself with a lesson imparted by his father on that trip: 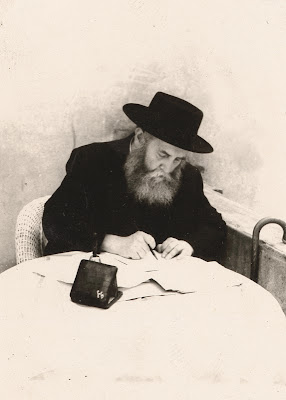 We were traveling then amongst the Mountains of Crimea, between Sevastopol and Yalta, in a closed carriage harnessed to four horses, as is the custom in those parts… The journey takes us amongst lofty mountains, towering high – a wilderness strewn boulders – with the road twisting and turning below. On the right are the mountains and on the left the sea shore…

Once we stopped to rest in the open field, that is to say, between one stopping place – where the wagon drivers usually stop to graze their animals – and another. While we sat on a rock, my father turned aside under one of the tall overhanging boulders, or rather into a kind of valley sheltered between two towering boulders, and there he prayed the afternoon prayer, although it was only two o’clock in the afternoon. My mother set out a variety of different foodstuffs, for we still had to travel for five or six hours in this carriage or another.

Although I preferred the company of the wagon driver, who was taking care of his four horses… however I had already come to understand the obligation of a son to worry for his father’s health, and I was very pained by his weak health. However, my strong desire that my father should study with me was stronger than anything, and I thought that my good conduct would make my father feel better. So well did I conduct myself that since we left Charkov [where Rabbi Sholom DovBer was warned by the Doctors to guard his health carefully], I carefully considered each aspect of my conduct that it should be executed in the most helpful fashion. Therefore I took a prayer book and reviewed my lesson; the psalm “the heavens describe the glory of G-d”.

We sat to eat, and my father pointed out a place, high on the mountainside and far away. From where we sat we could see what seemed to be a large hole in the rock. My father told us that when, in the year 1884 [according to the extent correspondence it would actually have been the late summer of 1883] he traveled with his brother, my uncle Raza, they traveled this road at night. At six in the mourning they stopped to rest in this very place, and went to pray high up on the mountain. At first, from a distance, it appeared to be no more than a hole, but once they arrived there they saw that it opened into a large cave, complete with smaller stones ideal for seating.

My father then explained to me then, that G-d created the world in such a way that each Jew is enabled to fulfill the commandments of G-d. When someone is traveling on a journey and the time to pray arrives, it is forbidden to pray in the open field. Therefore G-d created hollowed out rocks like these – which are like houses, in order that one may pray therein.

Email ThisBlogThis!Share to TwitterShare to FacebookShare to Pinterest
Labels: Education, Explanations of Chassidus, The Friedike Rebbe, The Rebbe Rashab