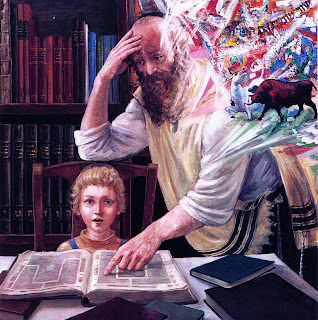 There is a difference between a Chassidic upbringing and a regular upbringing… even a religious upbringing.

He answered me, “In truth one must do so without asking why, however, I said that you should ask of me whatever you wish.”

My father called for Reb Yosef Mordechai the attendant, a Jew of eighty years, and asked him, “How do you recite Modeh Ani in the morning?”

Answered Reb Yosef Mordechai, “I lay one hand beside the other, and bow my head.”

“I do not know,” replied Reb Yosef Mordechai, “when I was a small child I was taught so.”

“You see,” said my father to me, “He does so because his father taught him so, and so on before him, in a chain that leads back to Moses our teacher and Abraham our forefather, who was the first Jew. We must do without asking why.”

“But I am only a little one…” I said, in an attempt at self defense.

“All Jews are little,” replied my father, “and it is only when we become older that we realize just how small we really are”.

That is true education.

This short account may seem a rather simplistic anecdote, but when understood within its correct context it is revealed to be loaded with depth and insight, requiring careful study. At the outset it seems that two contradictory themes are presented almost in a single breath. On the one hand the educational relationship was an open one, in which the young Yosef Yitzchak knew that he could ask his father any question he wanted and expect to receive an answer. However, Rabbi Sholom DovBer’s response to one such question seems to be decidedly reactionary in nature.
Perhaps the key to this rather enigmatic description lies in a comment made by Rabbi Yosef Yitzchak on another occasion:

When I was still very young, my father the Rebbe taught me to understand a concept through subtle insinuation, and to grasp each notion through allegory.

Although Rabbi Sholom DovBer seems to have dismissed the question, in truth he gave his son a very good answer. The posture we adopt when saying the Modeh Ani prayer, reflects the message of its content. “I submit before You, living and eternal King, for You have, with great mercy, restored my soul within me...” The lesson that Rabbi Sholom DovBer imparted to his young son is that submission before G-d must be complete and unquestioning. Rather than attempting to explain the theological concept to so young a child, Rabbi Sholom DovBer chose to show him a living example – the concept personified.
Herein lays one of the differences between the classic educational method and the Chassidic upbringing experienced by Rabbi Yosef Yitzchak. Rather than being essentially academic in nature and purpose, true education seeks to cultivate the loftiest moral and theoretical truths, specifically as they are implemented and activated in their most practical form. The most subtle and abstract of ideals were demonstrated via the most tangible of examples.