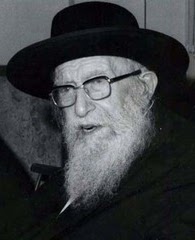 הגאון החסיד רבי יעקב לנדא זצ"ל
אב"ד עיר התורה בני ברק ת"ו
This Monday, the 26th of Shvat, is the twenty fifth Yhortzeit of Rabbi Yakov Landau, who served for fifty years as the Chief Rabbi of Bnei Brak. He was born in the year 5653 (1893) in the Chassidic town of Kurnitz, where his father, grandfather and great grandfather had served as Rov. He too took up that post upon his father’s death, which occurred before is twentieth birthday. He did so at the express directive of the Rebbe Rashab of Lubavitch, with whom he enjoyed a very special relationship.
This week Hebrew language weeklies such as Ba'kehila and Hamodia published special articles or sections in his honor, and while I have not yet seen the Hamodia, the main focus seems to be on his activities as Rov of Bnei Brak. This post will focus on his years in Russia.
During World War One, the Russian government passed a law expelling Jews from the towns and villages that were close to the front, and forcing them to move into areas further east that had previously been beyond the pale of settlement. These areas had almost no Jewish infrastructure, and the religious observance of the Jewish refugees was severely threatened. Many of the towns that they were now forced to settle in did not have Shuls, Chadorim or Mikvas; the most basic elements of religious life simply did not exist.
While efforts on behalf of the material needs of the refugees were spearheaded by Baron Alexander Ginzburg, the Rebbe Rashab and Reb Chaim Oizer Gridinsky, Rov of Vilna, spearheaded the efforts to ensure their spiritual welfare. A glance through the Rashab’s correspondence, printed in Igros Kodesh Vol. 5, provides a complete picture of the situation. Rabbi Yakov Landau was sent as the Rebbe’s personal representative to oversee the efforts on the ground. His chief preoccupation was the construction of Mikvahs. (See also the introduction to Igros Vol. 5.)
To a great degree it seems that the Rebbe Rashab considered him his personal Rov, and in that capacity he also constructed a Mikvah for the Rebbe himself in Rostov. Many years later the seventh Lubavitcher Rebbe consulted him as to how the Rebbe Rashab had had that Mikvah constructed, and is thanks to the ensuing correspondence (see Igrot Kodesh Vol. 2 pages 203, 226-7) that the famous “Bor Al Gabei Bor” model was preserved for posterity. The Rebbe consulted him on many other aspects of the Rebbe Rashab’s conduct (see for example Igros Kodesh Vol. 20 page 39), and looked to him as an authoritative source for transcripts of the Rebbe Rashab’s writings, talks and correspondence (e.g. ibid. Vol. 2 pages 128, 146-7). 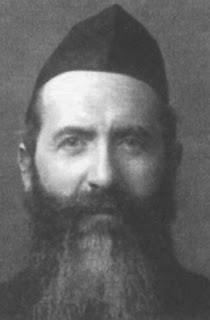 A very poignant occurrence, which highlights his very close relationship with the Rebbe Rashab, is related by his contemporary, Rabbi Moshe DovBer Rivkin, who later served as a Rosh Yeshiva in Yeshivas Torah Vedaas. This occurred following the famous Purim Seudah in Rostov, a few short weeks before the Rebbe Rashab’s passing:
“When the Rebbe stood up from the Seudah, entered his room and sat on his chair to rest a little, the Tomim Reb Yakov Landau – who was a “Ben-Bayis” to whom the Rebbe always showed extra closeness – followed after him. And being that on that occasion he [Rabbi Landau] was in a very excited and happy mood, he gathered his courage and said to the Rebbe ‘On this night, thank G-d, we experienced such joy, that we merited to sit with the Rebbe by the Seudah, which we didn’t previously expect! May Hashem grant that next year we will again merit to rejoice together with the Rebbe in Lubavitch!’
“The Rebbe did not reply to this at all. Reb Yakov again made a similar statement, and again the Rebbe did not answer him. Suddenly the Rebbe got up from his chair and went into the other room, the Reb Yakov followed him, and again repeated his previous words, and the Rebbe answered him, ‘May Hashem grant that we should be close spiritually.’
“Reb Yakov came out from the room and told us all this very excitedly, saying that he thinks that the Rebbe has decided to leave Russia (for at that time there was a suggestion from influential Chassidim that the Rebbe should leave the country…) …it never occurred to us that such a calamity would occur.” (Ashkavtah De'Rebbi, pages 11-12.)
Later he spent time in Moscow, where he organized and ran an “after hours” Yeshivah for Jewish university students and working men. In a letter dated the first of Kislev 5697 (winter 1936-7), (published in Sefer HaMamarim 5711, page 215-6,) the Friediker Rebbe writes:
“In the year 5687 (1927 the year of the Rebbe’s arrest) Purim Koton fell out on Wednesday, I was then in Moscow, and Anash and the Chassidim prepared a Farbraingen in the Chabad Shul…
“On that occasion I repeated the Mamer “Vekibel HaYehudim…” and in many places it speaks of committing one’s soul [‘Mesiras Nefesh’] for the observance of Torah and Mitzvahs, I stressed these points with special emphasis, without worrying that the walls have ears, and during the Farbraingen I again repeated these points with intentional enthusiasm, in order to arouse the hearts as was needed in those times.
“Amongst those gathered where approximately thirty – may they multiply – youngsters, the vast majority of them ‘high school’ [university?] students, and despite this, through the encouragement of Rabbi Yakov Landau – who was for a while the Rov in Blivoveh – they made themselves a “Tiferes Bochurim” group, and set aside time to study Torah, they also learnt Chassidus. During the Farbraingen our good friend, the Chossid Rabbi Yakov, who was present, said that we must show special regard to these youngsters who commit their souls in order to keep Shabbos and observe Mitzvahs, and also set aside to study Torah…”
Interestingly, he did not marry till he was in his late thirties. The wedding was held in Divinsk and Rabbi Yosef Rosen, the famed Rogotchover Goan, officiated. The Latvian Jewish newspaper “Fri’morgen” reported on the event, including a picture of the Chosson and some of the biographical details mentioned above.