From a letter by Reb Elyeh Chaim Althoiz to the Friediker Rebbe, Rabbi Yosef Yitzchak Schneersohn (Rayatz), who was visiting the United Sates of America at the time. As is described in the present letter, the Rebbe's family and the chassidim who he left behind were distraught at the prospect of Tishrei without the Rebbe. They were, however, consoled by the presence of the Rebbe's son-in-law and successor, Rabbi Menachem Mendel Schneerson. Free Translation. 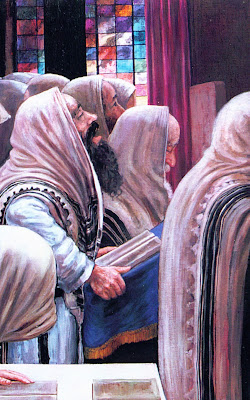 The Yom Kippur service finished later this year in the Rebbe's minyan than ever before, for the Rebbe's son-in-law [Ramash, Rabbi Menachem Mendel Schneerson] became totally absorbed in his prayers and oblivious to anything else during Neilah. A nice while passed before he managed to climb out of his reverie. All of us were filled with pleasure from this very pleasing wait. And as is well known, after Neilah the enthusiasm and ability of every Jewish soul to serve G-d is renewed like the strength of a young eagle.
Before the evening prayer we concluded with "Napoleon's March" like every year, but in every strain we sensed that everything we do without the Rebbe is as though we are only imitating - as Chaim Meir [the Rebbe's aid] says - "artificial". The element of truth and the lively enthusiasm, is somehow lacking. Why? I do not know. But certainly it is so...
As the morning dawned on the day proceeding Yom Kippur, at 4:30am, I came to the rooms of the Rebbe. I found that the Rebbitzen [Nechomah Dina, wife of the Rayatz] was already seated in the dining room as though it were the middle of the day, and the Rebbe's son-in-law [Ramash] was watching intently as our friend Reb Mordechai Cheifetz slaughtered the Kapparos.
Already the previous evening I had been commanded by the Rebbitzin to come and "Shlog Kapparos", for she had prepared a white cockerel for me. I Shlogged Kapparos, Reb Mordechai Chefetz slaughtered slaughtered it and Rabbi Menachem Mendel covered the blood. Afterwards the three of us, the Rebbitzen, her son-in-law and myself, stayed in the dinning room, all of us thinking the same thing... of the dispersion of close souls and the distance between those who are bound together, where are we? where is the Rebbe? Why did it have to be so? What will be in the future?
[Reading these letters one gets a sense of the relief, the uncertainty and the hope that prevailed during the interim after the Friediker Rebbe left Russia and before he settled in Warsaw, a situation that intensified as he spent long periods of time in Eretz Yisroel and the USA.]
I wanted to be the valiant one and attempted to distract the Rebbitzen from the many thoughts in her heart, I asked her why she rose so early in the morning, and suggested that she should retire to her room to rest. She answered with a simplicity both unpretentious and refined, saying "for more than thirty years I have accustomed myself to this. I was unable to sleep". And then, despite herself, tears began to pour from her eyes... and we too cried with her, reliving somewhat the intensity of our emotion. She poured tea for us from the thermos and also for herself, and we drank and began to talk.
Mendel [Ramash] opened a Tehilim and began to read in a tone that was a pleasure to hear [the word used hear is "geshmak" and denotes a certain depth of feeling, that brings the words to life]... I waited a while and realised that he intended to read the entire Tehilim without interruption, for I spoke to him and he did not reply. So I too took a Tehilim and was forced to do likewise (in front of the Rebbitzen I could do nothing else). We finished at 7:00am.
We went to the Mikveh, and then we set ourselves to pray with the Minyan, the Davening flowed geshmak...
Such is the short account of those few hours when a thread of kindness prevails throughout the world... May it be His will that this year my wife and children should see that kindness, as the Barditchever stressed "and your treasury that is good for us, open..."