A so-called 'biography' of the Rebbe, Rabbi Menachem Mendel Schneersohn has stirred much controversy and debate as to how committed he actually was to Chabad and the Chassidic (or even Orthodox) way of life. Much ink has already been spilled (most extensively at The Seforim Blog) in which the 'scholarship' of the author's is unmasked as being at the very best extremely lacking, and more probably, deliberately misleading. I do not intend to reiterate or add to the numerous examples of blatant falsification, nor do I intend to attack their central thesis directly. My intention here is simply to provide some context, lending perspective and better allowing the reader to appreciate the story of the Rebbe's life, who he was and what he did. 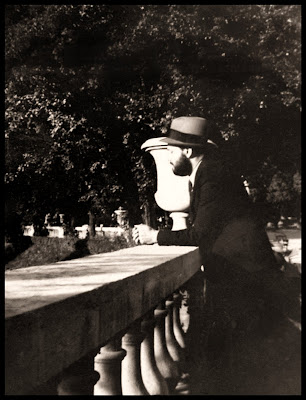 The Rebbe's conduct, prior to becoming Rebbe in general, and specifically during his sojourn in Berlin and then Paris, reminds of the following episode (as recorded in Shmues Vesipurim Vol 1, page 69):

When the third rebbe and leader of Chabad chassidism, Rabbi Menachem Mendel of Lubavitch - better known as the "Tzemach Tzedek", passed away in 1867, he was survived by a number of scholarly and pious sons. Each had a following of disciples who wished to see their mentor assume his father's place. Eventually Reb Shmuel, the youngest son, succeeded his father as the Rebbe in the town of Lubavitch and today he is known as the Rebbe Maharash.

Reb Shmuel Grunem Estherman, one of the great mashpi'im in Yeshivas Toimchei Temimim Lubavitch, was a young man at the time, and undecided as to which of the Rebbe's sons to turn for leadership and guidance. When he discussed his dilemma with Reb Shmuel Ber Barisover (of Barisov) - a Chossid of renown, the latter said to him: "Listen, Grunem. They are all children of the Rebbe. "They are all beloved, they are all mighty, they are all holy." But let me tell you of one incident, and then you do as you see fit.

"During one of my visits to Lubavitch, there was something in our late Rebbe's discourse which I found difficult to understand - it seemed to contradict a certain passage in the kabbalistic work of Eitz Chayim. None of the elder disciples were able to provide an answer satisfactory to me, so that night I made my rounds among the Rebbe's sons. I visited Reb Yehudah Lieb, Reb Chaim Schneur Zalman, and the others. Each offered an explanation, but, again, none of their ideas satisfied my mind. By now it was fairly late at night. I was headed for my lodgings when I noticed a light burning in Reb Shmuel's window. I had not considered asking him - he is the youngest of the sons and, as you know, his nature is retiring and diffident. However, I was curious to know what he is up to at such a late hour.

" The Rebbe Maharash's house, which stood in the courtyard of the Tzemach Tzedek, was built in the style of the wealthy, with high windows. I pulled myself up on to his windowsill and peered inside. What did I see, but Reb Shmuel immersed in the very section of Eitz Chayim where my difficulty lay?! 'So!' I thought to myself 'I have to visit him' . I dropped from the windowsill, walked around to the door and finding it locked, I knocked. 'Just a minute' he called out. After a rather long minute the door opened. I took in the scene: various newspapers were laid out on the table, German papers, Russian papers... However, of the Eitz Chayim there was not a trace.

"The Rebbe Maharash offered me a seat, which I accepted and he said to me 'Rather late, isn't it, Reb Shmuel Ber! What brings you here?' I told him of my problem with the discourse the Rebbe had delivered that day and the passage in Eitz Chayim. 'Ah, Reb Shmuel Ber' he said 'they say you are a smart Jew. Nu, I ask you, you come to me to talk about such things?'

" 'Listen,' I said, 'If you will discuss this with me all will be well. But if not, know that tomorrow I will tell everyone what I saw with my own eyes a couple of moments ago, the whole Lubavitch will be talking about it. Five minutes ago I saw you with the Eitz Chayim, only now did these newspapers appear.'

"Hearing this the Rebbe Maharash began to laugh and agreed to discuss my problem. We sat together all night till dawn, and I came away thoroughly impressed by the extent and depth of his knowledge and even more impressed by his unique humility." Rabbi Shmuel Ber concluded, " This is what I can tell you, Groinem, now you do as you see fit..."

What impressed Reb Shmuel Ber and what inspired Reb Groinem to accept the Rebbe Maharash as his Rebbe, was not Reb Shmuel's apparent prestige and position in the hierarchy of his fathers court. But on the contrary his positive attempt to hide his erudition and saintliness beneath the guise of a modern and worldly young man. To an outsider he may have appeared to be the least worthy candidate for the leadership, but to the discerning insider, the veteran Chossid, he was the most ideal candidate despite - and indeed because of - his attempts to disassociate himself from any form of positive publicity.
If you will speak to people like Reb Yoel Kahn and the other veteran Chassidim who were around at the time, if you will read the memoir literature and read the letters that document the Rebbe's arrival on American soil and eventual assent to leadership, this same theme reoccurs many time's over. To those who observed the Rebbe closely, he was an individual of great erudition and emotional depth, who constantly sought to disguise his true self from the Chassidim, shrinking from the limelight. The following is an excerpt from a private letter written by Reb Yoel Kahan to his father, dated Monday the 3rd of Adar 5710 [1950]:

"In general the Ramash is a very restrained and reticent individual, he appears to be a cold person, sitting composedly and speaking quietly, and suddenly he bursts into tears, before continuing to speak in the same tone of controlled quietude."

Idon not bring this as 'proof' but for the sake of illustration. I translated the Hebrew word Pnimi as "restrained and reticent", but in truth the term means much more than that. In the terminology of Chabad Chassidus the word Pnimi is used to describe an individual who acts upon what he understands to be the truth, without any need for recognition. And individual who is completely self aware and entirely comfortable with that self, and therefore independent and beyond the reach of external social influences. The conduct of a Pnimi is not effected in anyway by the circumstance in which he may find himself and is dependent only on the truth. He knows what needs to be done and doesn't waste a moment, applying himself wholly to its pursuit and fulfillment. All this, the Pnimi does with out fanfare, deliberately avoiding external attention as much as possible, in the knowledge that any unnecessary publicity may distract him from the obligations placed upon the self.
The Pnimi, in Chabad terminology, is perhaps the highest possible honorific. [In truth I could continue to describe the many nuanced character traits that exemplify the loftiest values of Chassidus and which are distilled into the single word Pnimi, at far greater length. However, I am sure that my readers will not hesitate to find fault in the limited description above (perhaps due to its simplicity, but yet) forcing me to better elucidate the merits of the Pnimi in the comments below.]
This is just one of many instances where the Chassidim are clearly seen to respect the Rebbe, not only despite his apparent coldness, modern outlook and non-chassidic appearance, but precisely due to the fact that they recognized these as signs that he was a true Pnimi. To the discerning eye, the Rebbe's Chassidic core was complete and unscathed, but more-so, the fact that he remaining pure and untouched by the external influences of Berlin and Paris stood as proof of his unflinching commitment to Chassidus under all circumstances. He was not in the game of Yiddishkeit for publicity or recognition, for a secure place in the hierarchy of his father-in-law's court, but because Yiddiskeit is the truth even in Berlin and Paris.