The following is a letter written by the Lubavitcher Rebbe on the 3rd of Tammuz 5710 [1950] within a few months of the Friediker Rebbe's passing. Explanatory editions to the literal translation of the original text are enclosed in square brackets. 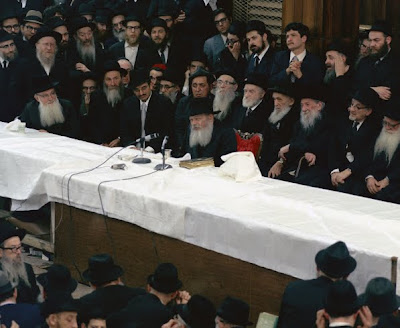 There are many seeking to define and explain the stature and greatness of the leaders of Chabad in general, and the leader of our generation – that is the Rebbe my father-in-law, may I be an atonement for his passing – specifically, in various ways: the optimization of self sacrifice, brilliant scholar, of refined character, righteous, possessive of Divine inspiration, a veteran miracle worker and many more [such descriptions of greatness].
These praises are even greater, in the light of the definitions [elucidated] in Chassidus, as to what self sacrifice is, what a brilliant scholar is, etc. [Chassidus adds great depth and dimension, explaining the import of each of these descriptions to be infinitely more subtle and profound than their simple connotation.]
Nevertheless, the main point is missing here. Added to the fact that this is essentially the main point, this point is even more important as it is the most pertinent, especially to us – the community of his Chassidim and those who are attached to him. This [most essential, important and pertinent point] is the fact that he is the leader, and [specifically] the leader of Chabad [as we will be explained below].
A leader [of the Jewish people] in general, is called “head of the thousands of Israel” [Tanya Chapter 2], being [metaphorically] the head and the brain relative to them [- the congregation of the Jewish people]. They derive their [spiritual] sustenance and livelihood from him. Through cleaving to him they are bound up and united with their source in the highest reaches. [Just as all parts of the body including the soles of one’s feet draw their sustenance according to the directives of one’s brain, so to even the simplest Jew is able to draw spiritual sustenance from G-d’s infinite greatness through connecting himself to a Tzaddik, a leader of the Jewish people. See Tanya Chapter 2 at length.]
There are many types of leaders: [in general terms they can be divided into] those who influence [those who associate with them] in an internal manner [so that their dependents may achieve an independent intellectual and emotional appreciation of G-dliness] or in a general manner [so that, for example, their dependents are inspired by the atmosphere created by the Tzaddik]. In these [two general categories] themselves there are variables: whether they [- the leaders] influenced [their dependents] via the revealed [aspects] Torah or via the hidden [aspect thereof], or via a unification of both; [whether they] taught the ways of [Divine] service [the inner, moral and devotional demands in addition to the practical demands of Judaism], drew down physical influence [such as the provision of health and livelihood] etc. etc.
There are such [leaders] who incorporated many of the above aspects, or all of them.
This has always been the hall-mark of the conduct of the leaders of Chabad, from the Alter Rebbe up until and including the Rebbe, my father-in-law – may I be an atonement for his passing, they incorporated all the types and all the variants: their influence was both internal and general; in [matters of] Torah, [Divine] service and good deeds; spiritually and physically. As a result their connection with those who where affiliated with them was in all 613 limbs [metaphorically] of the souls and bodies of those who are connected to them.
[In other words, the discipline taught by the Chabad Rabbeim was all encompassing, reaching into every aspect of human existence, both internally and externally, and binding the entirety of the individual with Divinity. On the one hand this places a heavy responsibility, a demand on the disciple – in order to consider oneself to be truly connected to all the Rebbe stood for, he must attempt to fully integrate all aspects of the Rebbe’s influence into his own life. On the other hand, this highlights the unique advantage and the essential greatness of the Chabad Rabbeim – through truly attaching oneself to the Rebbe one becomes wholly and completely united with G-d.]
It is incumbent on every man and women amongst us to know, that is to contemplate deeply and fix our thoughts upon this – that he is the leader and the head, from him and through him come all the influences physically and spiritually. Through connecting ourselves to him (and he already taught us how to connect to him [detailing the variant aspects of the Chabad discipline and their practical, contemporary application – the] “how” and [the] “what” – in his writings) we connect and unite [ourselves] with the source and the source of the source, until the Most High.
Menachem Schneerson
3rd of Tammuz 5710
Brooklyn, NY
The central thesis of this letter is that the purpose of any Rebbe or leader is to link his flock to G-d. Through attaching oneself to a Rebbe even an ordinary person is able to enter into a relationship with G-d. There are different types of Rabbeim and leaders of the Jewish people, however, in this they are all equal. They differ only in their method. The uniqueness of the Chabad method is that it is all encompassing, and therefore both more demanding and more desirable.
On a day like the 3rd of Tammuz we must take stock, and realize the tremendous privilege and responsibility that we must live up to if we are to consider ourselves Chassidim of the Rebbe.